Last weekend I was competing in Furudal at the Swedish Samoyed meeting.

I drove a six-team sled with the dogs: Saiko, Charlie, Igor, Jotka, Mieto and Moss. There were ten teams that starting in the class.

The first race day I started as number seven. The dogs seemed to be tagged in spite of the wet and heavy conditions and kept good speed the first few kilometers and we  past the team that had started 2 min before us. The rest of the stage went pretty well and I was happy with the day.

On Sunday we started as number five. Even before the start, Charlie began to show that he thought that Saiko, with whom he was i lead of the team, smelled really good and he was more interested in mating than running. Once we had started we were off with good speed and continued so about 1.5 km, then the lust was too uch for Charlie and the team stopped. (The thing is that Saiko wasn´t in heat but apparently she smelled very good anyway).

After some confusion, I realized that I had to change the lead dog and put forth Mieto together with Charlie (Mieto has never gone in lead but always done a very good job as wheeldog) and Saiko, who became so insecure beacause of Chalie's courtesies that she did not at all want to move forward, was placed second.
Finally, the team moved forward again. We had been overtaken by the team that started two minutes after us. Knowing that we really did not have time to waste if we were to pass the qualification I did what I could to encourage the dogs to increase the pace and helped them in all uphill.
We kept good speed but a speed that was actually more adapted for longer distance - not for sprint. When we had a few kilometers left, we suddenly caught up with the team that had passed us earlier. We kept on a couple of team lengths and kept pace, so on a hill the team ahead of us had a super throttle and after about 10 seconds of waiting I realized that it would take time before they came off so I chose to drive by.
We crossed the finish line without more incidents, unfortunately with a total time that was one second longer than the team that we had passed and which was not enough for a 1st prize. We ended up at a sixth place and without the award I had hoped for. Now I hope for good training conditions for the next season. 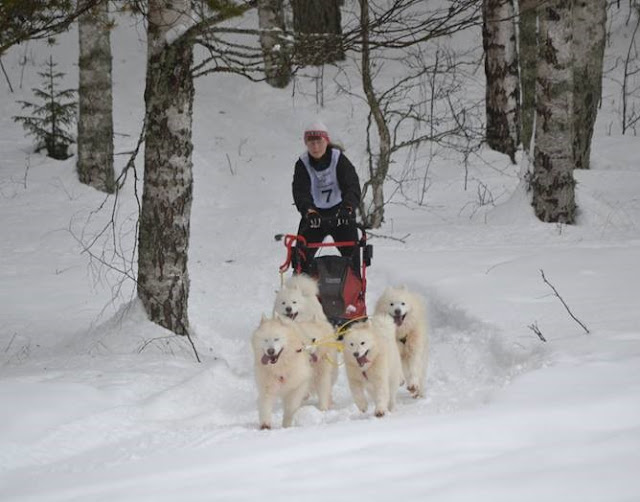